While I taught the 3 year old class last quarter, we learned about Joseph's life. One night we learned how Pharaoh put Joseph in charge of collecting grain in Egypt. After we had our story, I let each child take turns being Joseph. When they were Joseph they told the other children (the Egyptians) they had 7 years to gather the grain before they had 7 years of famine. They, of course, said this in their own words and it usually came out, "You have 7 years to get food. Hurry!" 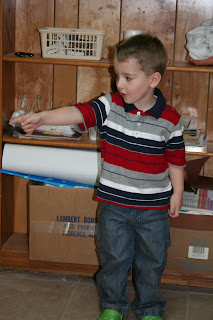 After "Joseph" gave the orders, he went over to the granaries (tall boxes) and the Egyptians got to work. I had blown up a ton of balloons and my assistant scattered them all over the room while "Joseph" was giving orders. When "Joseph" was in place, the Egyptians went to work collecting the grain (balloons) and taking them to Joseph at the granaries. 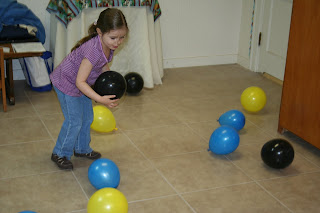 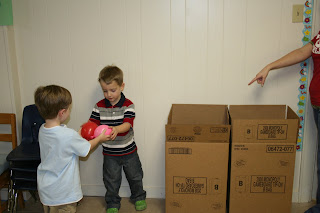 At first, the "Egyptians" took their time collecting the grain. So I started counting down from 7 years on down. They would start to hurry when they heard they only had 6 months or 3 months left to gather food.
They really enjoyed this activity and it helped them remember Joseph's job as well as how long the Egyptians had before the famine began.
Posted by Becky W at 5:52 PM

any other ideas to use instead of balloons??? I love the whole idea of getting the kids to collect food...I just don't think I can blow up all those balloons...