The Life of David
(Tune: BINGO) 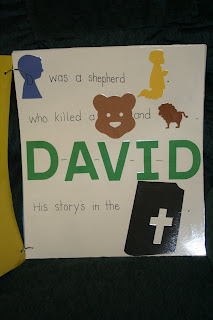 David was a shephed boy who killed a bear and lion. 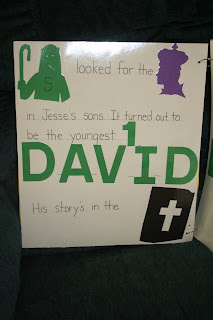 Saul looked for the king in Jesse's sons.

It turned out to be the youngest one. 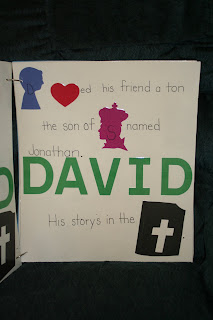 David loved his friend a ton.

The son of Saul named Jonathan.

The first verse was taken from the Ideashop magazine and then I made up the other 2 verses.

We used this song during our VBS that centered around David. My friend, Kim, then used the songs in her 4 year old class when they studied the different parts of David's life.

Rebus songs are great to use with preschool and early elementary ages to help them feel like they are "reading" the song.

With this song, we also made for each child their own D-A-V-I-D letters. We die cutted each letter (one for each child) and glued them on popsiscle sticks. The younger children (4-5 year olds) would lay them on the floor in front of them and point to the letters as they sang that part of the song. Older children (1-2 graderes) could do the same or try to hold them up as you sang the song.

You could also choose 5 helpers (one to hold each letter) to stand in front of the class. When you said their letter they could hold it up for the class to see. Taking this idea one step further would be to give each child a different picture from the song to hold up during the song.