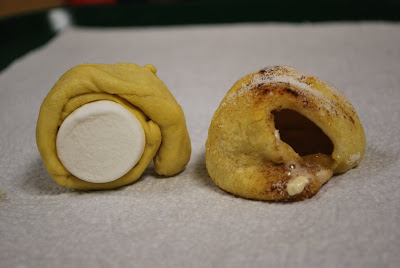 These were a big hit with everyone when teaching the lesson on Jesus' Resurrection. Kim found this idea and made these for both of our classes during VBS. They are super neat! As you can see in the picture you take a big marshmallow and a crescent roll (not cooked) and wrap the marshmallow to show the tomb not empty. You roll it in sugar and cinnamon and bake. As it bakes the marshmallow melts and when you remove them from the oven you have an empty tomb! These were cooked ahead and brought to class but we used a non-cooked roll to show the children that the marshmallow was in the tomb! I just loved these. They taste really good too!! 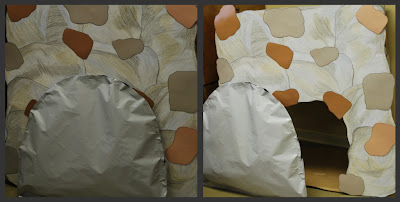 My friend Sasha and I made this tomb to use in the 2 year old class at VBS. It was not hard at all. I called our local furniture store and asked for a box. We cut the box down a little so it wouldn't take up quite so much room. Sasha made rocks from poster board. We had them laminated for durability so we could use them again in the future. The stone was made by covering a piece of the box that we cut off and stuffing a little paper into one side. We cut a hole for the entrance and that's it! The box was plenty big enough for the kids to get in and look for Jesus! It was a big hit. Boxes are great for making props and just about every store has boxes that they would love to get rid of.
Posted by Sandy at 11:50 AM